Lugano, Switzerland (April 3, 2020) - NovaAlgoma Short Sea Carriers (“NASC”), a joint venture of Algoma Central Corporation (“Algoma” - TSX: ALC) and Nova Marine Holdings SA (“Nova”), today announced they have taken delivery of the Sider Buffalo, a 6,800 deadweight (“DWT”) mini-bulker from the Ningbo Xinle Shipyard (the “Shipyard”) in China. The Sider Buffalo is the first of six new-build mini-bulkers to be delivered by the Shipyard and is expected to begin service in May, 2020.

The NASC new-build program will see three additional 6,800 dwt and two 8,800 dwt vessels added to the fleet with deliveries scheduled in 2020 and 2021 with the Company holding options for a further six plus six additional units. Despite the economic uncertainty and challenges associated with COVID-19, NASC remains confident in its fleet expansion plan and with the long-term outlook of this business. NASC has committed financing in place to fund the delivery of the remaining firm orders.

“We are proud to have the first delivery completed in this program and thankful to everyone who made it possible during these challenging times. The delivery of a new vessel, particularly at times like these, is an important reminder that brighter times will return and this vessel will be ready to do her part carrying grains and other vital commodities” said Vincenzo Romeo, Chief Executive Officer of Nova Marine Carriers. “The Sider Buffalo is truly a magnificent ship; no detail has been overlooked in developing a modern and highly efficient vessel design and in overseeing its quality construction with our longtime shipyard partners, Ningbo Xinle. The Sider Buffalo and its sister ships will be game-changing, segment leaders in the mini-bulk space,” added Mr. Romeo.

To commemorate the anniversary of Algoma and Nova’s four year partnership and in anticipation of the delivery of the Sider Buffalo, Gregg Ruhl, President and CEO of Algoma Central Corporation presented Giovani Romeo, an Owner of Nova Marine Carriers, with a crystal buffalo during the Marine Club meetings in Toronto in January.

“I want to thank both Giovani and Vincenzo Romeo and their team for all of their hard work on this project. The addition of the Sider Buffalo to the NASC fleet of owned and commercially managed vessels will further distinguish NASC as the carrier of choice in the mini-bulk segment,” said Mr. Ruhl. “The Sider Buffalo’s name has significance for me personally, having been born and raised in Buffalo, New York, but also for this partnership, with the buffalo symbolizing strength, stability and prosperity. Now more than ever our strength will help us overcome these unprecedented times we are all facing, and we will continue to uphold our commitment to delivering essential goods to the world,” continued Mr. Ruhl.

Nova Marine Carriers SA, headquartered in Lugano, Switzerland, operates a varied fleet of modern bulk carriers and belt self-unloading vessels ranging from 5,000 dwt up to 57,000 dwt.  With around one hundred ships under control, Nova specializes in bulk traffic in the Mediterranean, Atlantic and Middle East and in Italian/European cabotage. 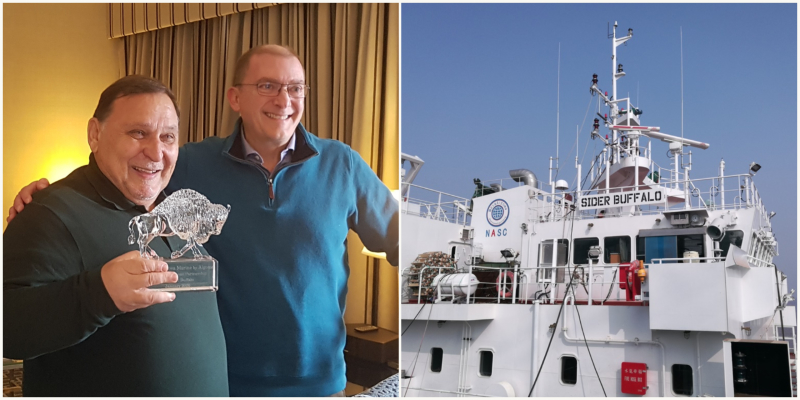